In spring, everything blooms, even potatoes. But watch out because these sprouts are not what they seem to be. Have you ever opened the larder and find that extravaganza starring a sprouted potato? We don’t know if it is a beautiful sign of living nature or a born-to-be-wild kind of gesture from a potato. Anyway, this potato’s sprouts have an explanation, and they tell you if you can eat or not the potato.

These sprouts germinate in the elder potatoes of our larder, and eventually, they will become a new potato plant. It happens in our kitchen due to heat, and the process is even faster when exposing to sunlight.

If the potato is wrinkly and soft, it is feeding the new sprouts with nutrients to grow, so we should not eat it. However, when the potato is still firm and smooth, it keeps all the natural nutrients, and you just need to remove the sprouts to eat it. 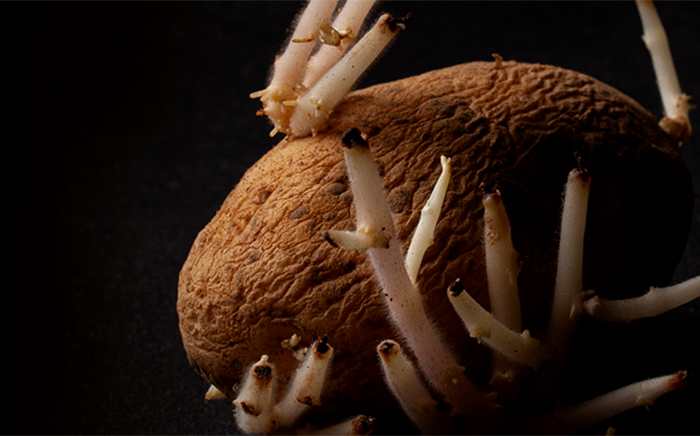 What if the sprouts are green?

If the sprouts have also a suspicious green colour, the light has already caused some chemical reactions in the potato, like chlorophyll production. That is why it turns green, something that is not dangerous for a human being.

But then, what’s the deal?

Well, the issue here is that light and heat also caused that solanine reacts, a chemical we can find in the potato naturally but poisonous for humans when eating in large quantities. It is not common, though it is better not consumed potatoes with a greenish colour or remove those areas before cooking.

Advice: use your common sense before cooking those rebel potatoes and, if you are not sure, just don’t use them.

You can find out more about which cookies we are using or switch them off in settings.

This website uses cookies so that we can provide you with the best user experience possible. Cookie information is stored in your browser and performs functions such as recognising you when you return to our website and helping our team to understand which sections of the website you find most interesting and useful.

Strictly Necessary Cookie should be enabled at all times so that we can save your preferences for cookie settings.

If you disable this cookie, we will not be able to save your preferences. This means that every time you visit this website you will need to enable or disable cookies again.

This website uses Google Analytics to collect anonymous information such as the number of visitors to the site, and the most popular pages.

Please enable Strictly Necessary Cookies first so that we can save your preferences!